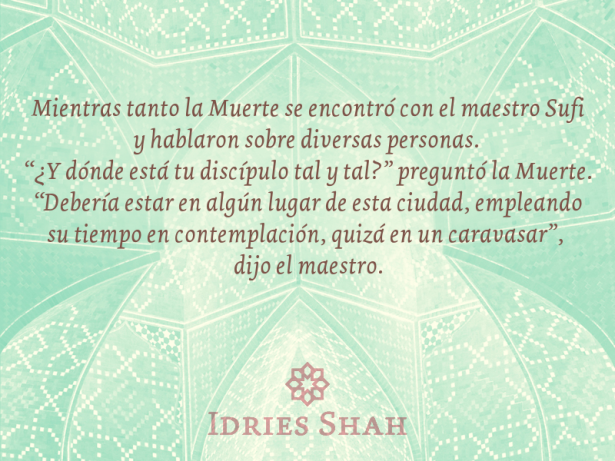 END_OF_DOCUMENT_TOKEN_TO_BE_REPLACED

Tales of the Dervishes
Read the book, for free, here:
http://idriesshahfoundation.org/…/tales-of-the-dervishes-t…/ 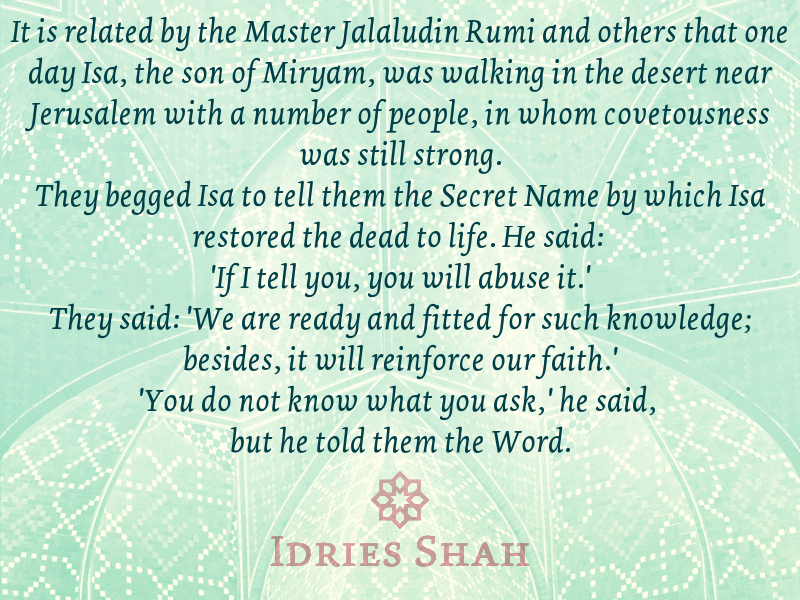 Tales of the Dervishes
Available in printed and eBook editions. Read the book, for free, here:
http://idriesshahfoundation.org/…/tales-of-the-dervishes-t…/

Isa and the Doubters

The Man with the Inexplicable Life

There was once a man named Mojud. He lived in a town where he had obtained a post as a small official, and it seemed likely that he would end his days as Inspector of Weights and Measures.

END_OF_DOCUMENT_TOKEN_TO_BE_REPLACED

Tales of the Dervishes
Available in printed and eBook editions. Read the book, for free, here:
http://idriesshahfoundation.org/…/tales-of-the-dervishes-t…/

The Man with the Inexplicable Life

Tales of the Dervishes
Read the book, for free, here:
http://idriesshahfoundation.org/…/tales-of-the-dervishes-t…/

The Man Who Was Easily Angered

A man who was very easily angered realized after many years that all his life he had been in difficulties because of this tendency.

One day he heard of a dervish deep of knowledge, whom he went to see, asking for advice.

END_OF_DOCUMENT_TOKEN_TO_BE_REPLACED 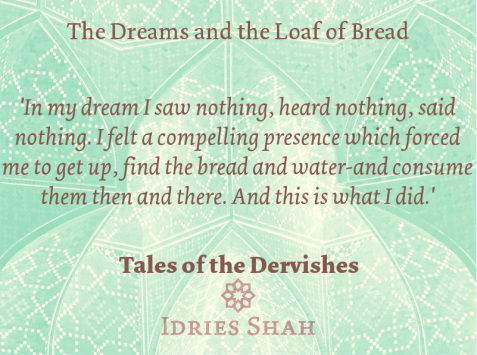 THREE travellers on a long and exhausting journey had become companions, and shared the same pleasures and sorrows, pooling all their resources.

After many days they realized that all they had between them was a piece of bread and a mouthful of water in a flask. They fell to quarrelling as to who should have all the food. Making no progress on this score, they tried to divide the bread and water. Still they could not arrive at a conclusion.

As dusk was falling, one finally suggested that they should sleep. When they awoke, the person who had had the most remarkable dream would decide what should be done.

END_OF_DOCUMENT_TOKEN_TO_BE_REPLACED 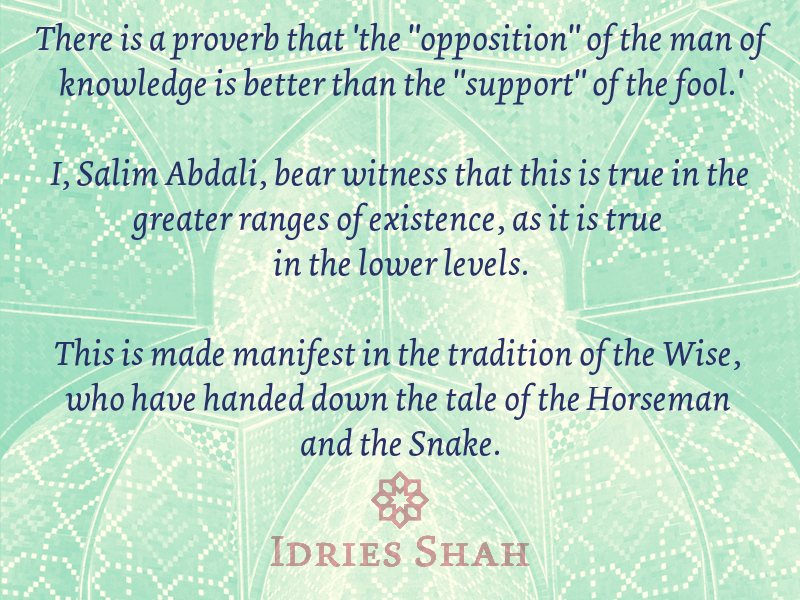 The Horseman and the Snake

THERE is a proverb that ‘the “opposition” of the man of knowledge is better than the “support” of the fool.’

This is made manifest in the tradition of the Wise, who have handed down the tale of the Horseman and the Snake.

A horseman from his point of vantage saw a poisonous snake slip down the throat of a sleeping man. The horseman realized that if the man were allowed to sleep the venom would surely kill him.

Accordingly he lashed the sleeper until he was awake. Having no time to lose, he forced this man to a place where there were a number of rotten apples lying upon the ground and made him eat them. Then he made him drink large gulps of water from a stream.

All the while the other man was trying to get away, crying: ‘What have I done, you enemy of humanity, that you should abuse me in this manner?’

Finally, when he was near to exhaustion, and dusk was falling, the man fell to the ground and vomited out the apples, the water, and the snake. When he saw what had come out of him, he realized what had happened, and begged the forgiveness of the horse-man.

This is our condition. In reading this, do not take history for allegory, nor allegory for history. Those who are endowed with knowledge have responsibility. Those who are not, have none be¬yond what they can conjecture.

The man who was saved said: ‘If you had told me, I would have accepted your treatment with a good grace.’

Spurring his horse, the mysterious rider rode away.

Available in printed and eBook editions. Read the book, for free, here:

The Horseman and the Snake