Higher BMI is linked to decreased cerebral blood flow, which is associated with increased risk of Alzheimer’s disease and mental illness, according to a new study in JAD

Amsterdam, NL and Costa Mesa, CA, USA – As a person’s weight goes up, all regions of the brain go down in activity and blood flow, according to a new brain imaging study in the Journal of Alzheimer’s Disease. One of the largest studies linking obesity with brain dysfunction, scientists analyzed over 35,000 functional neuroimaging scans using single-photon emission computerized tomography from more than 17,000 individuals to measure blood flow and brain activity.

Low cerebral blood flow is the #1 brain imaging predictor that a person will develop Alzheimer’s disease. It is also associated with depression, ADHD, bipolar disorder, schizophrenia, traumatic brain injury, addiction, suicide, and other conditions. “This study shows that being overweight or obese seriously impacts brain activity and increases the risk for Alzheimer’s disease as well as many other psychiatric and cognitive conditions,” explained Daniel G. Amen, MD, the study’s lead author and founder of Amen Clinics, one of the leading brain-centered mental health clinics in the United States. 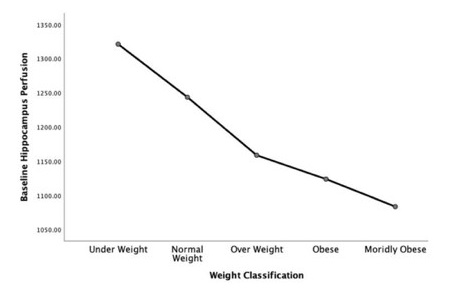 Striking patterns of progressively reduced blood flow were found in virtually all regions of the brain across categories of underweight, normal weight, overweight, obesity, and morbid obesity. These were noted while participants were in a resting state as well as while performing a concentration task. In particular, brain areas noted to be vulnerable to Alzheimer’s disease, the temporal and parietal lobes, hippocampus, posterior cingulate gyrus, and precuneus, were found to have reduced blood flow along the spectrum of weight classification from normal weight to overweight, obese, and morbidly obese. 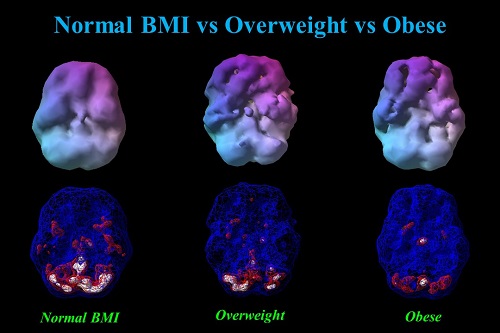 Considering the latest statistics showing that 72% of Americans are overweight of whom 42% are obese, this is distressing news for America’s mental and cognitive health.

Commenting on this study, George Perry, PhD, Editor-in-Chief of the Journal of Alzheimer’s Disease and Semmes Foundation Distinguished University Chair in Neurobiology at The University of Texas at San Antonio, stated, “Acceptance that Alzheimer’s disease is a lifestyle disease, little different from other age-related diseases, that is the sum of a lifetime is the most important breakthrough of the decade. Dr. Amen and collaborators provide compelling evidence that obesity alters blood supply to the brain to shrink the brain and promote Alzheimer’s disease. This is a major advance because it directly demonstrates how the brain responds to our body.”

This study highlights the need to address obesity as a target for interventions designed to improve brain function, be they Alzheimer disease prevention initiatives or attempts to optimize cognition in younger populations. Such work will be crucial in improving outcomes across all age groups.

Although the results of this study are deeply concerning, there is hope. Dr. Amen added, “One of the most important lessons we have learned through 30 years of performing functional brain imaging studies is that brains can be improved when you put them in a healing environment by adopting brain-healthy habits, such as a healthy calorie-smart diet and regular exercise.”

NOTES FOR EDITORS
Full open access study: “Patterns of Regional Cerebral Blood Flow as a Function of Obesity in Adults” by Daniel G. Amen, Joseph Wu, Noble George, and Andrew Newberg (doi.org/10.3233/JAD-200655). The article appears online in the Journal of Alzheimer’s Disease in advance of Volume 77, Issue 3 (September 2020) published by IOS Press. The study is openly available at: content.iospress.com/articles/journal-of-alzheimers-disease/jad200655.

Contact
To request the full text of the article or further information please contact Diana Murray, IOS Press (+1 718-640-5678 or d.murray@iospress.com) To reach the authors for comment please contact. Natalie Buchoz, Amen Clinics (+1 714-421-3778 or nbuchoz@amenclinic.com) For questions about the Journal of Alzheimer’s Disease, please contact George Perry (+1 210-458-8660 or george.perry@utsa.edu)

About the Journal of Alzheimer’s Disease
Now in its 23d year of publication, the Journal of Alzheimer’s Disease (JAD) is an international multidisciplinary journal to facilitate progress in understanding the etiology, pathogenesis, epidemiology, genetics, behavior, treatment, and psychology of Alzheimer’s disease. The journal publishes research reports, reviews, short communications, book reviews, and letters-to-the-editor. Groundbreaking research that has appeared in the journal includes novel therapeutic targets, mechanisms of disease, and clinical trial outcomes. JAD has a 2019 Journal Impact Factor of 3.909 according to Journal Citation Reports (Clarivate, 2020). It is published by IOS Press. j-alz.com

About IOS Press
IOS Press is headquartered in Amsterdam with satellite offices in the USA, Germany, India and China and serves the information needs of scientific and medical communities worldwide. IOS Press now publishes more than 80 international peer-reviewed journals and about 75 book titles each year on subjects ranging from computer science, artificial intelligence, and engineering to medicine, neuroscience, and cancer research. iospress.com