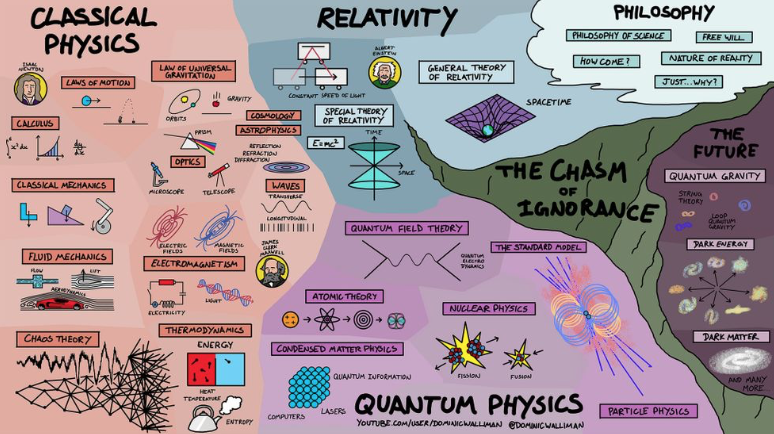 If you’ve ever wondered which part of physics covers which part of space, fret no more. Here is an awesome map that lays it all out.

Space is big. Really big. You just won’t believe how vastly, hugely, mindbogglingly big it is. But DON’T PANIC. Physics is on it. And if you’ve ever wondered which part of physics covers which part of space, fret no more. Here is an awesome map that lays it all out.

Dominic Walliman, “youtuber, science writer and physicist,” has created a wonderful infographic that shows the many branches of physics and how they all come together. He has accompanied it with a brief but informative video that gives a chronological overview of each branch and explains the matters (and energies) it is concerned with.

You may learn, for example, that Condensed Matter Physics describes the quantum physics of many atoms together in solids and liquids and is where technologies like computers and lasers come from. You may also learn that Quantum Field Theory is the closest we’ve gotten to bridging the gap between quantum physics and the Special Theory of Relativity but Quantum Field Theory has not yet found a way to include gravity (!) in it. (That feels like a pretty big gap.)

Walliman made the map to help people who may feel lost in physics like he once was.

“When you are learning a new subject, I think the single most useful thing is a good mind map that lays out all the subject areas so you know where the information you are learning fits in. I can remember so many times, sitting in a lecture, having no idea what the prof was talking about and how it related to other subjects.

I think this is often the case when I’m explaining physics to other people. I know physics really well (one would hope so after doing it for such a long time), so I thought I would make a map of all of physics as it is now. This is all the stuff we know about physics – and a few things we know we don’t know.”

He has created several other mind maps and videos, like a map of chemistry, a map of mathematics and a map of computer science.

While the map of physics sure seems daunting as is, it actually only covers scientific fields that describe about 5% of the universe. With dark energy and dark matter making up the other 95%, there are many new branches of physics we can be expecting in the future.