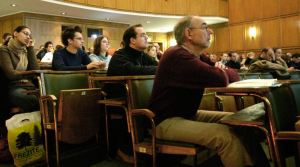 Picture yourself at a college graduation day, with a fresh cohort of students about to set sail for new horizons. What are they thinking while they throw their caps in the air?

What is it with this thin sheet of paper that makes it so precious? It’s not only the proof of acquired knowledge but plays into the reputation game of where you were trained. Being a graduate from Harvard Law School carries that extra glitz, doesn’t it? Yet take a closer look, and the diploma is the perfect ending to the modern tragedy of education.

Why? Because universities and curricula are designed along the three unities of French classical tragedy: time, action, and place. Students meet at the university campus (unity of place) for classes (unity of action) during their 20s (unity of time). This classical model has traditionally produced prestigious universities, but it is now challenged by the digitalisation of society – which allows everybody who is connected to the internet to access learning – and by the need to acquire skills in step with a fast-changing world. Universities must realise that learning in your 20s won’t be enough. If technological diffusion and implementation develop faster, workers will have to constantly refresh their skills.

The university model needs to evolve. It must equip students with the right skills and knowledge to compete in a world ‘where value will be derived largely from human interaction and the ability to invent and interpret things that machines cannot’, as the English futurist Richard Watson puts it. By teaching foundational knowledge and up-to-date skills, universities will provide students with the future-proof skills of lifelong learning, not just get them ‘job-ready’.

Some universities already play a critical role in lifelong learning as they want to keep the value of their diplomas. This new role comes with a huge set of challenges, and needs largely to be invented. One way to start this transformation process could be to go beyond the ‘five-year diploma model’ to adapt curricula to lifelong learning. We call this model the lifelong passport.

The Bachelor’s degree could be your passport to lifelong learning. For the first few years, students would ‘learn to learn’ and get endowed with reasoning skills that remain with them for the rest of their lives. For instance, physics allows you to observe and rationalise the world, but also to integrate observations into models and, sometimes, models into theories or laws that can be used to make predictions. Mathematics is the language used to formulate the laws of physics or economy, and to make rigorous computations that turn into predictions. These two disciplines naturally form the foundational pillars of education in technical universities.

Recent advances in computational methods and data science push us into rethinking science and engineering. Computers increasingly become principal actors in leveraging data to formulate questions, which requires radically new ways of reasoning. Therefore, a new discipline blending computer science, programming, statistics and machine learning should be added to the traditional foundational topics of mathematics and physics. These three pillars would allow you to keep learning complex technical subjects all your life because numeracy is the foundation upon which everything else is eventually built.

According to this new model, the Master of Science (MSc) would become the first stamp in the lifelong learning journey. The MSc curriculum should prepare students for their professional career by allowing them to focus on acquiring practical skills through projects.

Those projects are then intertwined with fast-paced technical modules learned ‘on-the-fly’ and ‘at will’ depending on the nature of the project. If, for instance, your project is developing an integrated circuit, you will have to take a module on advanced concepts in microelectronics. The most critical skills will be developed before the project even starts, in the form of boot camps, while the rest can be fostered in tandem with the project, putting them to immediate use and thus providing a rich learning context.

In addition to technical capabilities, the very nature of projects develops transversal, social and entrepreneurial skills, such as design thinking, initiative taking, team leading, activity reporting or resource planning. Not only will those skills be de facto integrated into the curriculum but they will be very important to have in the future because they are difficult to automate.

In short, the new MSc diploma becomes a portfolio of accomplished projects and a list of technical skills learned in modules. This portfolio is open-ended and must be updated throughout life, as technologies and their applications change faster than ever.

After the MSc diploma is earned, there would be many more stamps of lifelong learning over the years. If universities decide to engage in this learning model, they will have to cope with many organisational challenges that might shake their unity of place and action. First, the number of students would be unpredictable. If all of a university’s alumni were to become students again, cohorts would be much bigger than they are now, and it could become unsustainable for the campus in terms of both size and resources. Second, freshly graduated students would mix with professionally experienced ones. This would change the classroom dynamics, perhaps for the best. Project-based learning with a heterogeneous team reflects the reality of the professional world and could therefore be a better preparation for it.

If lifelong learning were to become a priority and the new norm, diplomas, just like passports, could be revalidated periodically. A time-determined revalidation would ease administration for everybody. Universities as well as employers and employees would know when they have to retrain. For instance, graduates from the year 2000 would have to come back in 2005.

This could fix the main organisational challenges for the university, but not for the learners, due to lack of time, family obligations or funds. Here, online learning might be an option because it allows you to save your ‘travel time’, but it has its limits. So far, none of the major employers associated with online learning platforms such as Coursera and Udacity has committed to hire or even interview graduates of their new online programmes.

Even if time were not an issue, who will pay for lifelong learning? That’s the eternal debate: should it be the learner’s responsibility, that of his employer, or of the state? For example, in Massachusetts, the healthcare professions require continuing education credits, which are carefully evidenced and documented. Yet the same state’s lawyers don’t require continuing legal education, although most lawyers do participate in it informally. One explanation is that technology is less of factor in law than it is in healthcare.

Europe has many scenarios, but the French and Swiss ones are interesting to compare. In France, every individual has a right to lifelong learning organised via a personal learning account called compte personnel de formation that is credited as you work. In Switzerland, lifelong learning is a personal responsibility and not a government one. However, employers and the state encourage continuing education either by funding parts of it or by allowing employees to attend it. A reporton the future of work for the McKinsey Global Institute found that 89 per cent of companies in Switzerland in 2015 supported further training courses, and 44 per cent of all those employed by companies with at least 10 employees took part in training courses.

Universities have a fundamental role to play in this journey, and higher education is in for a change, similar to that experienced by the French classical theatre model in the 19th century. In 1830, Victor Hugo proposed a Romantic tragedy, Hernani, that would overturn the three unities. To ensure that the censors would not prohibit his play, Hugo assembled a ‘romantic army’ by gathering enough of a crowd for the opening night. Not only was Hernani allowed but it had 100 performances, breaking the monopoly of the old model. Just like classical theatre, the old university model produced talent and value for society. We are not advocating its abolition but rather calling for the adaptation of its characteristics to meet the needs of today.