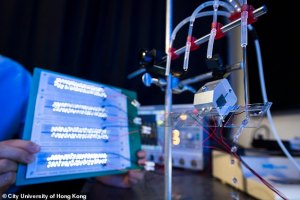 The droplet-based electricity generator has a high energy-conversion efficiency and power density thousand times bigger than its counterparts.

The developers hope the tech will help to tackle the world energy crisis by providing new ways of making use of the environmental energy around us in water and rain.

The generator could be used in various settings where water meets a solid surface — such as on the hulls of boats, along coastlines and on the outside of umbrellas.

“Our research shows that a drop of 100 microlitres of water released from a height of 15 centimeters can generate a voltage of over 140 volts,’ said lead author and engineer Zuankai Wang of the City University of Hong Kong.

‘The power generated can light up 100 small LED light bulbs,’ he added.

While the concept of hydropower is nothing new — hydropower dams and tidal power stations are running across the globe —but limitations of current tech have stopped us from fully making use of the power available from waves and raindrops.

This power comes in the form of low-frequency kinetic energy.

‘The kinetic energy entailed in falling water is due to gravity and can be regarded as free and renewable. It should be better utilised,’ Professor Wang said.

Conventional droplet energy generators take advantage of the triboelectric effect, in which electricity is generated when certain materials come into contact with each other, with the friction causing them to trade electrons.

Unfortunately, the size of the charge that can be generated on such surfaces has typically been very limited, leading to very low energy conversion efficiency.

First, the team used a material called polytetrafluoroethylene (or PTFE) which has a quasi-permanent electric charge. 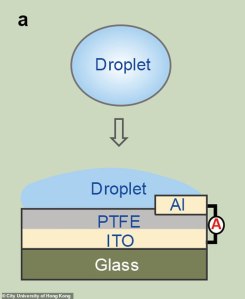 They found that when drops hit PTFE, the charges on its surface gradually build up until they reach a saturation point — allowing them to overcome the bottleneck presented by previous approaches that could only build up small charges.

The second feature of the new design is how it resembles a so-called field-effect transistor — a device which is a basic building block of modern electronics and for the creation of which the 1956 Nobel Prize in Physics was awarded.

The energy generator’s design features two electrodes — one aluminium, the other made of indium tin oxide with a PTFE coating, on which the charge is generated.

When falling droplets hit the latter surface, they bridge the two electrodes, turning the original setup into a closed-loop electric circuit, releasing the stored charge and generating electric current to power the lights.

The researchers also found that the technique is not affected by lower relative humidities — and it works with both rainwater and seawater.

According to the researchers, the concept could be used on various surfaces where liquids come into contact with solids, to fully exploit the low-frequency kinetic energy that can be found in water.

Professor Wang said that he hoped the technology will help to harvest water energy in order to tackle the global issue of renewable energy shortages.

‘Generating power from raindrops instead of oil and nuclear energy can facilitate the sustainable development of the world,” he added.

The researchers have filed for a patent on their technology in both the United States and in mainland China.

The full findings of the study were published in the journal Nature.