About four years ago, pathologist Matthew Anderson was examining slices of postmortem brain tissue from an individual with autism under a microscope when he noticed something extremely odd: T cells swarming around a narrow space between blood vessels and neural tissue. The cells were somehow getting through the blood-brain barrier, a wall of cells that separates circulating blood from extracellular fluid, neurons, and other cell types in the central nervous system, explains Anderson, who works at Beth Israel Deaconess Medical Center in Boston. “I just have seen so many brains that I know that this is not normal.”

He soon identified more T-cell swarms, called lymphocytic cuffs, in a few other postmortem brains of people who had been diagnosed with autism. Not long after that, he started to detect another oddity in the brain tissue—tiny bubbles, or blebs. “I’d never seen them in any other brain tissue that I’ve looked at for many, many different diseases,” he says. Anderson began to wonder whether the neurological features he was observing were specific to autism.

To test the idea, he and his colleagues examined postmortem brain tissue samples from 25 people with autism spectrum disorder (ASD) and 30 developmentally normal controls. While the lymphocytic cuffs only sporadically turned up in the brains of neurotypical individuals, the cuffs were abundant in a majority of the brains from individuals who had had ASD. Those same samples also had blebs that appeared in the same spots as the cuffs. Staining the brain tissue revealed that the cuffs were filled with an array of different types of T cells, while the blebs contained fragments of astrocytes, non-neuronal cells that support the physical structure of the brain and help to maintain the blood-brain barrier.

Reading the literature and drawing on his experience as a pathologist, Anderson started to think about blebs and what they do when they show up in tissues beyond the brain. For example, in cancer, “blebs are generated when T cells attack a tumor cell,” he explains. “The tumor cells will spit out surface membrane pieces . . . as a way to protect [themselves] from the attack, but also possibly to deliver signals to other cells around them.” In the brain samples from individuals with ASD, the blebs visually resembled blebs created in response to tumors. The brain blebs may be formed in response to the infiltration of T cells into the space between blood vessels and neural tissue, Anderson suggests, while the cell fragments they contain could come from the astrocytes that make up the glia limitans—the final wall of defense separating neural tissue from foreign and toxic substances circulating in the blood.

Lymphocytic cuffs, meanwhile, are common in diseases such as skeletal muscle polymyositis, a type of chronic muscle inflammation. That disease has many traits of autoimmune disorders, in which the body perceives and attacks parts of itself as foreign, and it’s a disease that Anderson had often seen in biopsies. “I’ve seen many [cuffs] under the microscope,” he says. “So I know what a T-lymphocyte attack of an organ looks like.” The cuffs also show up in response to toxins, or antigens given off by a virus, and cause brain inflammation. 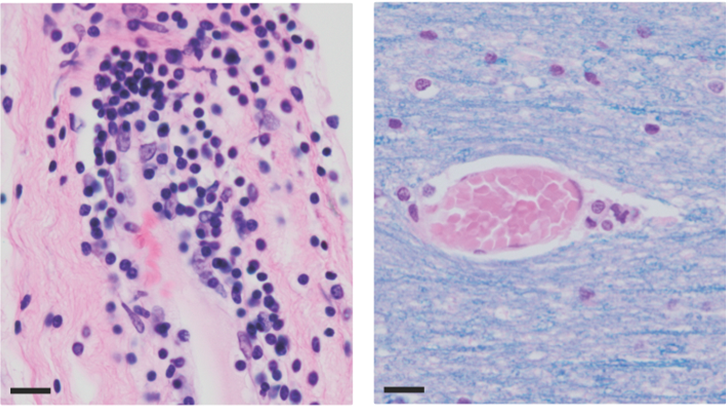 The finding of both cuffs and blebs in the postmortem brains of autistic people suggests that the individuals’ T cells were also responding to some antigen—either a molecule considered foreign even though it’s created by the person’s own body, or a viral or bacterial one encountered in utero, Anderson says. Except for rare cases in which an autism-linked genetic mutation can be identified, the cause of ASD is unknown. According to the new data, a majority of the unexplained cases could have arisen as an autoimmune disorder or an inflammatory condition triggered during pregnancy, Anderson and colleagues concluded in a recent paper.

“It’s really a very striking finding,” says Dan Littman, an immunologist at New York University Langone Health who was not involved in the work. The team’s results, he notes, fit well with recent animal research showing a connection between the immune system and autism—specifically that interleukin-17 (IL-17), a signaling molecule produced by T cells to help fend off pathogens, can cause rodents to exhibit behaviors associated with autism. In 2016, Littman and colleagues reported that blocking the production of IL-17 in pregnant mice prevented their pups from developing an autism-like condition. “You could imagine that if cytokine-producing cells in the central nervous system are localizing in particular places, they could be contributing to behavioral changes,” Littman says.

The findings also dovetail with what little has been described in the way of neuropathological features of autism in humans, Anderson says. Fifteen years ago, Carlos Pardo-Villamizar of Johns Hopkins University and colleagues studied postmortem brain tissues and cerebrospinal fluid from individuals with autism and found signs of neuroinflammation in the cerebral cortex, white matter, and cerebellum—regions essential for sensory perception and for motor skills such as balance and coordination. Transcriptional profiling of postmortem brains from individuals with autism revealed elevated levels of messenger RNAs that make inflammatory proteins, and more-recent data support the conclusion that the brains of individuals with autism are typically in an inflammatory state.

While the Boston team’s discovery of T cell–induced inflammation associated with autism is noteworthy, the astrocyte blebs are particularly intriguing, notes Duke University neuroscientist Staci Bilbo, who did not participate in the new study. The development of the blebs in reaction to the cuffs “points to a role for the blood-brain barrier breaking down,” something rarely studied in autism, she says. Looking further into the interaction between the cuffs and the blebs could reveal not only how, but why T cells are getting into the brain, giving clues to the origins of autism in cases driven by immune dysfunction.

Anderson says his team has already started follow-up experiments, running transcriptome profiling of the cuffs and blebs. Infiltration of T cells into the space between blood vessels and neural tissue, and the subsequent generation of blebs, “almost for sure is going to trigger the expression of unique genes and proteins” in the astrocytes and “may dissociate autism even more specifically from other conditions,” he says. His team is also looking at the receptors on the T cells in the cuffs to determine what’s provoking the immune cells to swarm. The researchers are studying all of the genes linked to autism and to autoimmunity as well—an analysis that has begun to reveal “a signature of an autoimmune genetics within the existing autism genetics,” Anderson says. “It’s a multi-pronged approach.”

Ashley Yeager is an associate editor at The Scientist. Email her at ayeager@the-scientist.com. Follow her on Twitter @AshleyJYeager.