Physicists finds evidence from just after the Big Bang that supports the controversial holographic universe theory.

An international study claims to have found first observed evidence that our universe is a hologram.

What is the holographic universe idea? It’s not exactly that we are living in some kind of Star Trekky computer simulation. Rather the idea, first proposed in the 1990s by Leonard Susskind and Gerard ‘t Hooft, says that all the information in our 3-dimensional reality may actually be included in the 2-dimensional surface of its boundaries. It’s like watching a 3D show on a 2D television.

«Imagine that everything you see, feel and hear in three dimensions (and your perception of time) in fact emanates from a flat two-dimensional field. The idea is similar to that of ordinary holograms where a three-dimensional image is encoded in a two-dimensional surface, such as in the hologram on a credit card. However, this time, the entire universe is encoded,“ explained the study’s co-author Professor Kostas Skenderis of Mathematical Sciences at the University of Southampton.

The new study involved a team of theoretical physicists and astrophysicists from the U.K., Canada and Italy who studied the cosmic microwave background and discovered enough irregularities there that pointed to the holographic theory as a legitimate rival to the theory of cosmic inflation, the way these anomalies are usually explained.

The new analysis by the scientists was made possible by the advancement of telescope and sensing tech that can look for information in the «white noise» or microwaves that remain from the early universe right after the Big Bang.

By studying and mapping data from the Planck space telescope, the team found that the observational data they found was largely predictable by the math of holographic theory.

«Holography is a huge leap forward in the way we think about the structure and creation of the universe. Einstein’s theory of general relativity explains almost everything large scale in the universe very well, but starts to unravel when examining its origins and mechanisms at quantum level. Scientists have been working for decades to combine Einstein’s theory of gravity and quantum theory. Some believe the concept of a holographic universe has the potential to reconcile the two. I hope our research takes us another step towards this,» added Professor Skenderis. 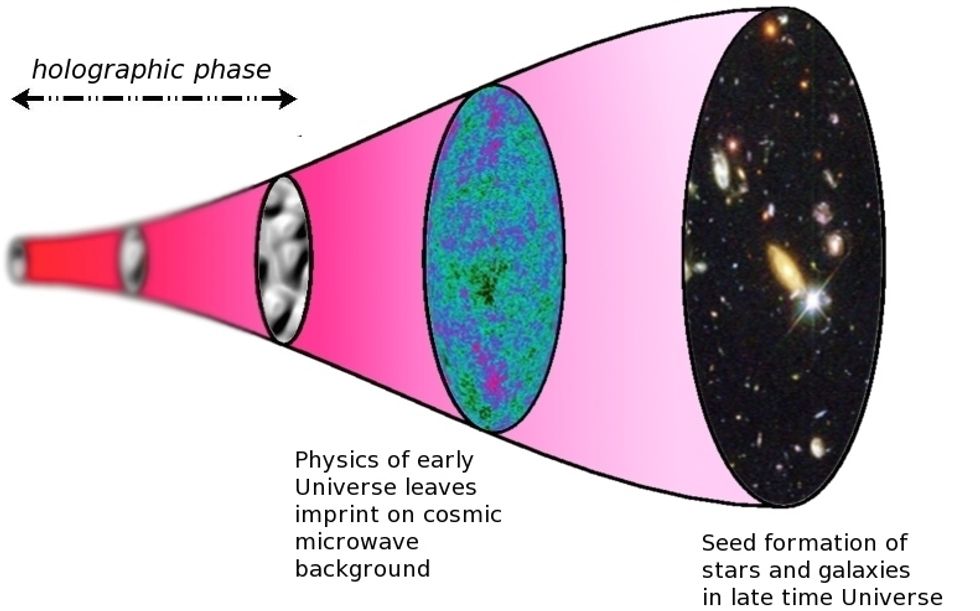 A sketch of the timeline of the holographic Universe where time runs from left to right. The holographic phase (far left) is where the image is blurry because space and time haven’t been defined yet. After this phase comes to a close, the Universe goes into a geometric phase, which can be described by Einstein’s equations. Credit: Paul McFadden

The implications of this study could lead the scientists to improved understanding of how time and space were created.

«When we go into this concept of holography, it’s a new way of thinking about things. Even the scientists who worked on this for the past 20 years don’t have the right tools or the right language to describe what’s going on,» said Skenderis. «It’s a new paradigm for a physical reality.»

The study’s lead author, Niayesh Afshordi of the Perimeter Institute and the University of Waterlo, expressed a similarly positive sentiment about their finding:

«I would argue this is the simplest theory of the early universe. And so far, this is as simple as it gets. And it could help explain everything we see,» Afshordi said.