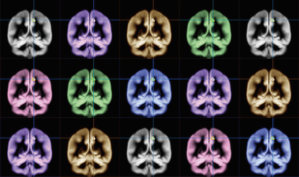 Happiness is linked to having more gray matter brain volume in the precuneus.

A team of neuroscientists in Japan reported today that people who scored higher on a happiness survey had more gray matter volume in a brain region called the precuneus. The researchers stated that study participants who “feel happiness more intensely, feel sadness less intensely, and are more able to find meaning in life have a larger precuneus.”

In many ways, these findings seem dubious and vague. I had reservations about writing about this study for two reasons. Firstly, “happiness” is such an overused and ambiguous term. Secondly, anytime neuroscientists try to pinpoint an isolated brain region as being responsible for a single human behavior or emotion it can be misleading or misconstrued.

Joseph E. LeDoux, Ph.D., points this out in a Psychology Today blog post, “The Amygdala is NOT the Brain’s Fear Center,” when he says, “I am often said to have identified the amygdala as the brain’s “fear” center. But the fact is, I have not done this, nor has anyone else. The idea that the amygdala is the home of fear in the brain is just that—an idea. It is not a scientific finding but instead a conclusion based on an interpretation of a finding.”

The same could possibly be said about the recent claims by Wataru Sato and his team at Kyoto University who say they have found an answer to the root of our “happiness” seated in the precuneus. However, there is growing evidence that something noteworthy is going on in the precuneus. This new discovery linking the precuneus with happiness may turn out to be groundbreaking—which is why I ultimately decided to write this Psychology Today blog post this morning.

The researchers in Japan defined happiness as, “a combination of happy emotions and satisfaction of life coming together in the precuneus.” Their definition of being “happy” reminds me of the Greek word eudaimoniawhich is sometimes translated as “happiness” but, in fact, is more related to “human flourishing.” The ancient Greek notion of being “happy” was associated with having an “indwelling spirit” based on virtue and “doing the right thing” to achieve a contented state of mind.

Why Is the Precuneus Taking Center Stage?

The November 2015 study from Kyoto University, “The Structural Neural Substrate of Subjective Happiness,” was published in the journal Scientific Reports. For this study, Sato and his team scanned the brains of research participants using MRI. Then, the study participants took a survey to identify how happy they are generally, how intensely they feel emotions, and how satisfied they are with their lives.

In recent months, the precuneus has been gaining traction and popping up in a wide range of studies. A September 2014 study, “Precuneus Is a Functional Core of the Default-Mode Network,” was published in the Journal of Neuroscience. The researchers at Duke University reported that the precuneus is a core hub of the default mode network (DMN), which is active during states of consciousness related to self-reflection, divergent thinking, and daydreaming.

Another November 2015 study, by a research team from Harvard Medical School and University of Chinese Medicine, “Subthreshold Depression Is Associated with Impaired Resting-State Functional Connectivity of the Cognitive Control Network,” was published online in the journal Translational Psychiatry. In this study, the researchers found that underconnectivity of the precuneus to other brain regions may be linked to depression.

In a press release, Sato concluded, “Over history, many eminent scholars like Aristotle have contemplated what happiness is. I’m very happy that we now know more about what it means to be happy. Several studies have shown that meditation increases gray matter mass in the precuneus. This new insight on where happiness happens in the brain will be useful for developing happiness programs based on scientific research.”

The Kyoto University researchers hope that having a better understanding of the neural mechanism behind happiness will help identify and quantify levels of happiness more objectively in the future. They are also optimistic that effective mindfulness and meditation training directed towards happiness and satisfaction can be fine-tuned with the help of brain science and a better understanding of the precuneus.