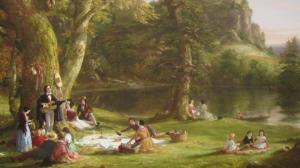 As a former Type A person, I firmly believe that most Type A types are failing at life. They’ve opted for an utterly miserable existence, working in unrewarding jobs that make them unhappy and stressed and take them away from their loved ones. A Type A life is largely without leisurely novels, adventurous travels, or hours at the pub with friends—and all because pleasure has been rejected as a worthwhile goal.

Hedonistic philosophers knew better. This school of thought holds that pleasure is a good worth pursuing and that the ideal human life is filled with pleasure. Today, the word is colloquially used to describe a life of self-indulgence and sensual delights. But, in Ancient Greece, the hedonist worldview did not necessarily descend into a life of gluttony and frivolity.

There are several branches of “hedonism” in philosophy, and one of the most well-known—advanced by Ancient Greek philosopher Epicurus—ultimately advocates for a rather simple life. “Epicurus’s version agrees that pleasure is the greatest good and the best life is the most pleasant life,” says James Warren, professor of Classics at Cambridge University. “But he thinks the highest pleasure you can achieve is the absence of pain. Once pain has been removed, you don’t increase pleasure from that point on, you just vary it.”

Far from feasting copiously, Epicurus was content with bread and water, which prevented him from starving and so abated any pain. He was not opposed to the occasional indulgence, at one point writing in correspondence, “Send me a little pot of cheese, that, when I like, I may fare sumptuously,” but once he’d sated his hunger, he thought no greater pleasure would come from actively seeking more elaborate dining.

For Epicurus, a hedonistic life is one free from bodily and mental pains. Most people live miserable lives because they’re so worried and anxious, and so the key to Epicurean hedonism is eradicating all anxiety.

Perhaps the Epicurean lifestyle of bread and water doesn’t sound particularly hedonistic or appealing. But his thinking on how to eradicate pain contains a nugget of insight that is worth applying even to our radically different lives, more than two millennia on.

“[According to Epicurus], you need to stop desiring anything you don’t naturally need,” says Warren. “Inspect those things you desire. When you find there’s something you desire that’s either unnatural or unnecessary, then you should recognize that and stop wanting it.”

Epicurus certainly took an extreme view; he decided he needed very little, and a life without such desires gave him the greatest possible pleasure. But his emphasis on assessing wants and desires is useful for those who adopt a less strict Epicurean approach.

It’s easy to fall into false beliefs about what matters, based on the expectations of those around us. Hedonistic philosophy helps to puncture those views and reminds us what’s truly valuable. True pleasure, far from being frivolous, is the ultimate indication of a life well lived.