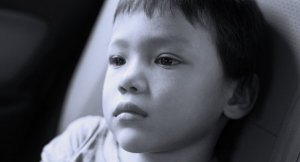 Experts agree that preschoolers are entirely capable of suffering from clinical depression. And that this depression is not always the result of abuse or neglect.

Until he began doodling bloody pictures of bleeding necks, April Lisbon wasn’t worried about the mental health of her four-year-old student. As a psychologist working with young children in District of Columbia public schools, Lisbon had seen her share of disaffected youth. Besides, this particular boy was known to be difficult. He came from a broken home. His father was in jail. His mother was absent. He would crawl under tables at school and fall asleep. When teachers woke him, he lashed out. But all that was, from a clinical perspective, normal — regrettable, absolutely, but not uncommon.The drawings, however, were a red flag. Looking at the bloodied figures, Lisbon knew this wasn’t just another angry preschooler.

“Is it hard to believe? Absolutely,” Lisbon says. “But it’s possible for even a three-year-old to experience depression. We should not overlook the signs just because of the ages. If we do, we miss out on critical years to intervene.”

Experts agree that preschoolers are entirely capable of suffering from clinical depression. And that this depression is not always the result of abuse or neglect. Depression in small children works in much the same way as it does in teenagers and adults, studies suggest. It is partly environmental, to be sure, but largely genetic and neurological. So parents of preschoolers who have faced little adversity may still find themselves caring for listless, unmotivated, or self-harming children. Still — perhaps because it sounds implausible or doesn’t align with cultural ideas about childhood — preschool depression remains largely unstudied and undetected. Troubled children use crayons to cry for help, but most don’t receive any.

“Most tend to assume young children cannot be depressed. This is a false assumption,” Joan Luby of Washington University School of Medicine in St Louis, told Fatherly. Luby is one of the only researchers currently involved in large-scale investigations of preschool depression, and she has published several papers on the subject. “We’ve been studying depression in young children, and what it looks like. We know that it’s a familial disorder, that there’s some genetic underpinning, and that it’s a combination of environment and genes that bring it out.”

Luby suspects that 1 to 2 percent of preschoolers suffer clinical depression, a rate similar to that of school-aged children. By comparison, depression affects up to 10 percent of adolescents. Studies have found that preschoolers at risk of depressionexpress less joy and excitement during activities such as blowing bubbles, racing cars, and receiving gifts. As a rule, depressed preschoolers are irritable, unable to enjoy activities and play, and prone to experiencing excessive guilt when they break the rules. They are preoccupied with negative feelings and thoughts, and engage in negative play themes, such as drawing graphic pictures of death and violence. They eat infrequently and mope around in a somber daze.