“The notion that you can make an artist overnight, that there is nothing but genius, and a dash of temperament in artistic success is a fallacy,” artist Georgia O’Keeffe asserted when she was 40 years old in 1928. The year before, she’d been given her first retrospective at the Brooklyn Museum -an indisputable marker of success. But O’Keeffe, who would live to the age of 98, wasn’t done developing as an artist -or contemplating what it meant to be one.

“Great artists don’t just happen, any more than writers, or singers, or other creators,” she continued. “They have to be trained, and in the hard school of experience.”

O’Keeffe never formally recorded her theories about art. She did, however, leave a long trail of interviews and letters that reveal how she approached her painting practice -and the rituals, experiences, and environments that inspired her.

Correspondence with her husband, photographer Alfred Stieglitz, in particular, offers a rawn honest glimpse in to O’Keeffe’s creative mind. The two exchanged 25,000 pages of letters between 1915 and 1946, during which time she found her voice as an artist: first, through her flower paintings, and later, through landscapes and surrealistic still lifes inspired by her mountainous, skull-studded surroundings in New Mexico.

Below, we highlight several lessons that can be gleaned from O’Keeffe’s words. They touch on the importance of observation, organization, perseverance, and giving oneself over to the wild joy of painting.

Lesson #1: Observe the world around you – closely, hungrily 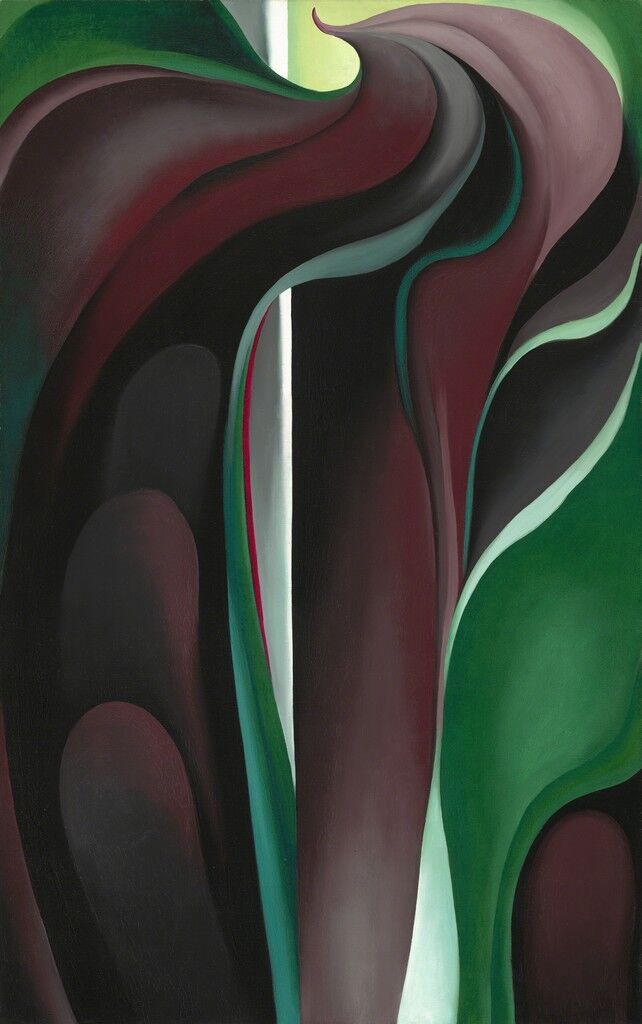 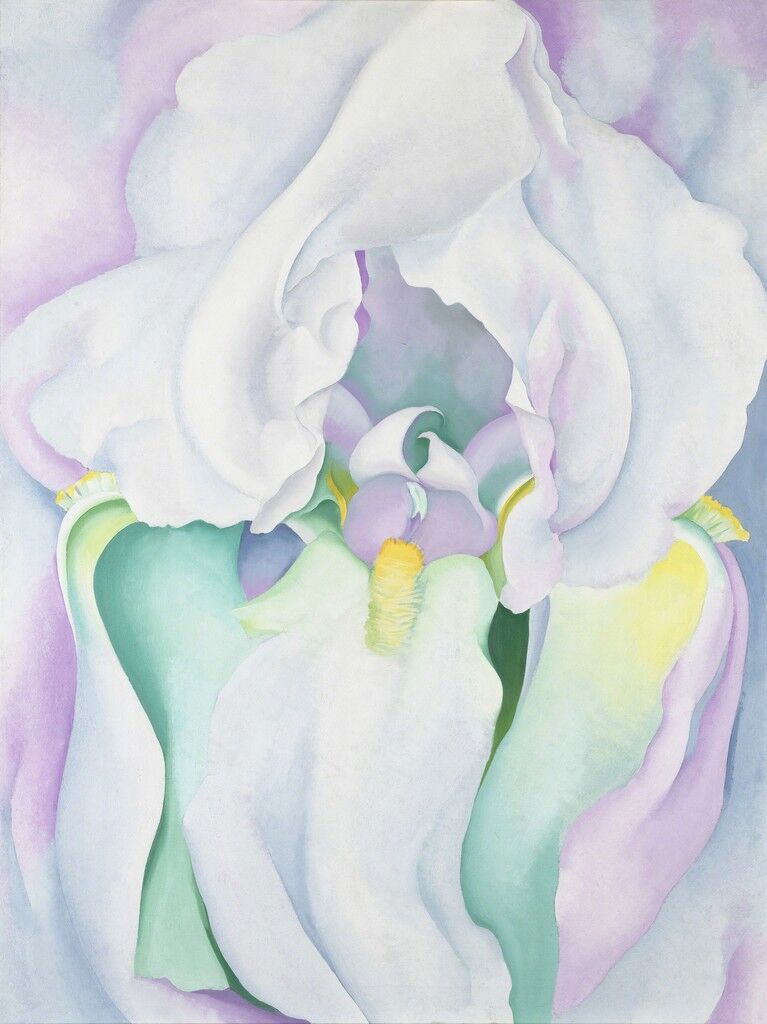 “I made several little drawings,” O’Keeffe wrote to Stieglitz in 1930, from Taos, New Mexico. “It was wonderful sitting there alone watching the light and shadow over the desert and mountains -and wondering what I could do about it… It all interests me much more than people -they seem almost not to exist.”

O’Keeffe drew inspiration for her paintings from the natural world that enveloped her. Whether in Lake George, New York, where she spent time throughout her twenties and thirties, or in Abiquiu, New Mexico, where she’d later establish a studio and home, it was the flora and fauna, or the way that light reflected off of rocks, that mesmerized her.

“I wish you could see out the window,” she wrote to her friend Arthur Dove in 1942. “The earth pink and yellow cliffs to the north -the full pale moon about to go down in an early morning lavender sky behind a very long beautiful tree covered mesa to the west -pink and purple hills in front and the scrubby fine dull green cedars -and a feeling of much space- It is a beautiful world.”

O’Keeffe absorbed views like these, then isolated the components that struck her. It was her favourite lines and colours that she brought to her canvases: paintings filled with soft, saturated folds or vast, pared-down desert vistas. Even her abstract paintings grew from her observations of nature. As historian David W. Galenson has pointed out, they represent the “progressive simplification of the shapes of real objects.”

Lesson #2: Organization is key to productivity 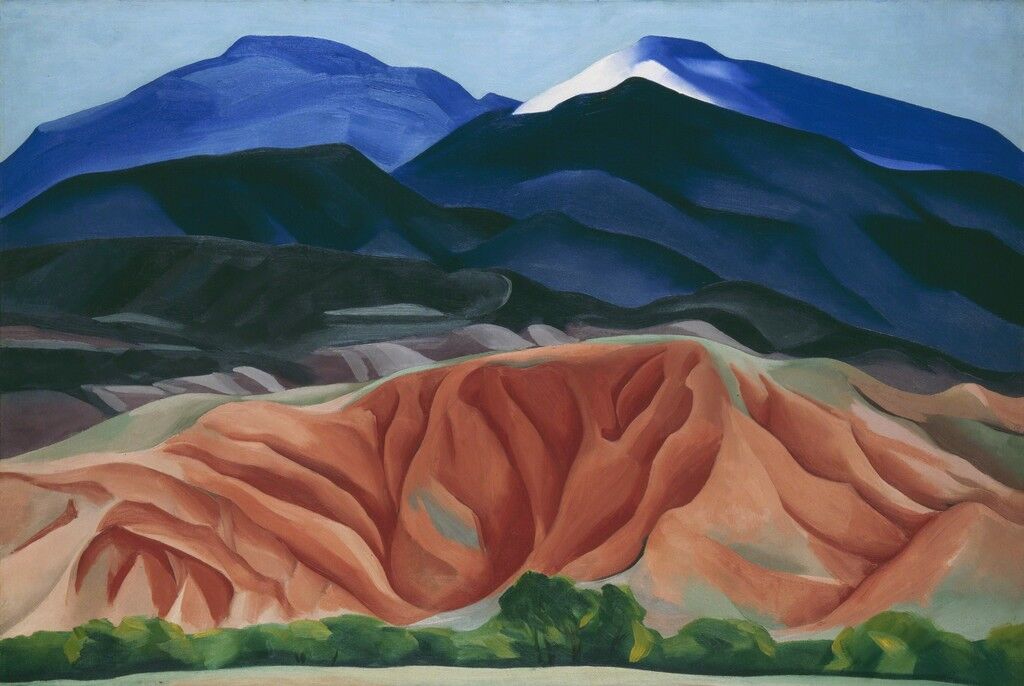 Despite her reputation as a free spirit, O’Keeffe thrived when her materials were meticulously organized and she stuck to a daily routine. She relished long work days, in which she rose aerly and eschewed other activities (like writing letters) in favour of alone time in the studio. “I didn’t write you yesterday -I worked all day and again today all day- and I can’t tell you how I enjoyed it,” she wrote to Stieglitz in 1929. “I was at work before eight -stopped a couple of hours at noon -then at it again till six- I will be at it again tomorrow -I haven’t had such a feeling of real pleasure in working in a long time.”

Her daily rituals became even more pronounced later in life, after she retreated full-time to New Mexico in 1949. Many days, she’d rise with the sun and take an early walk through the desert. Breakfast would follow at 7 a.m., and usually consisted of eggs, bread, and hot chili with garlic oil, as Mason Currey pointed out in the book Daily Rituals: How Artists Work. Sated by an early-morning does of nature and grub, she’d head to her studio, breaking at noon for lunch.

Throughout her life, she kept her studios clean and neat. In 1951, she described her Abiquiu workspace to a friend with a description that, these days, reacalls the hashtag #thingsorganizedneatly. “My palette is very clean -my brushes too- The palette is on a table I can wheel about -another one is on the window sill- the easel is over there by the window -another easel is on the window sill,” she wrote. “One ten foot table is full of canvas and stretchers and hammers and tacks -then there is a small table full of little pieces of canvas covered cards painted tones of all the colours I have.”

After O’Keeffe death, a cache of 330 colour cards were discovered in her studio, as historian Ann Daly has pointed out. Together, the swatches served as an archive of the hues she’d used in particular paintings, which she’d refer back to. Organizational strategies like this allowed O’Keeffe to more easily experiment with her palette, as well as translucency and texture of the paints she used. 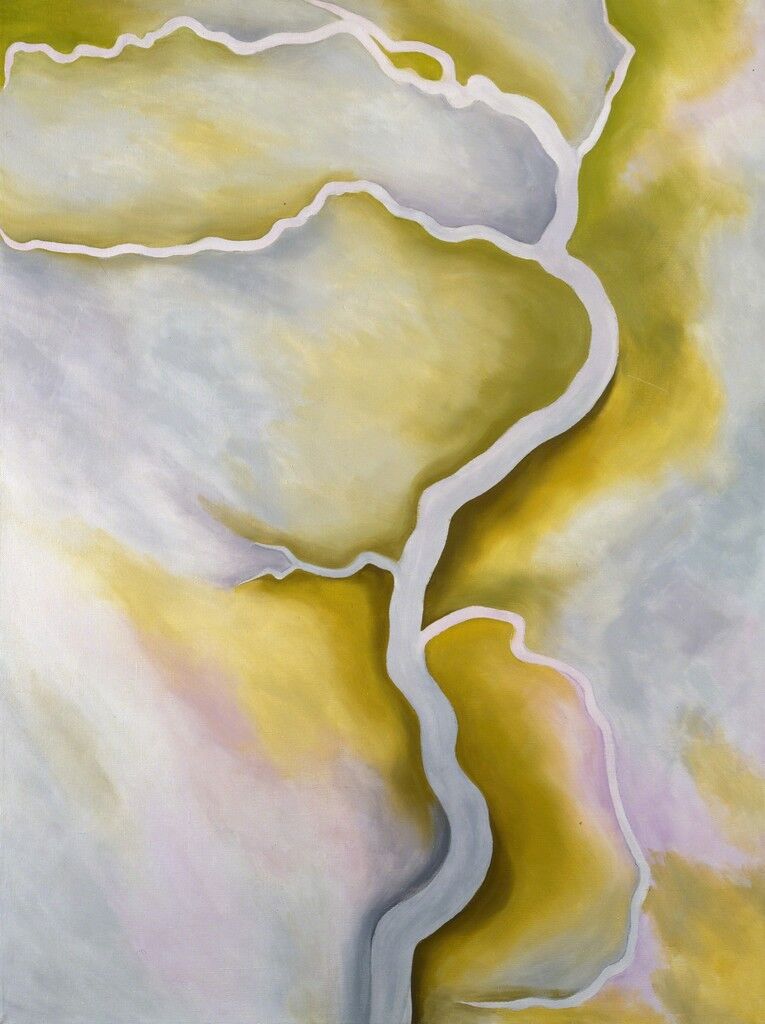 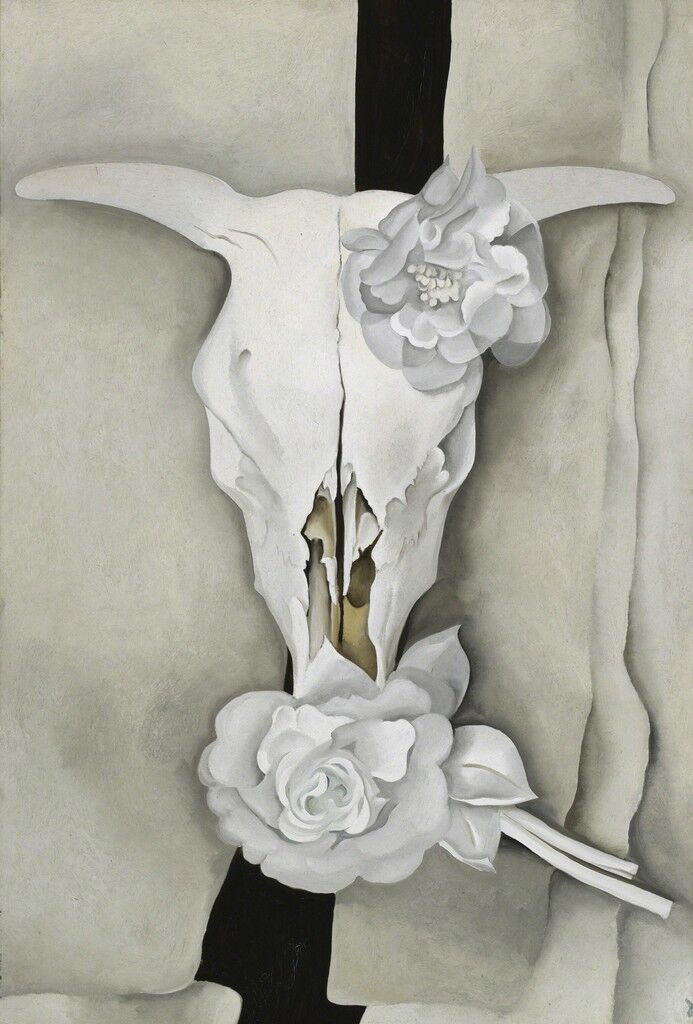 O’Keeffe was open with her friends when it came to her insecurities and failures. But she also accknowledged that making bad work was inevitable, and simply part of the creative process. “The painting of this morgning is no good,” she wrote to Stieglitz in 1929. “But I was much excited over it- and know that something will come.”

Throughout her practice, O’Keeffe depicted the same objects and scenes over and over again -until she landed on a composition she was happy with. Between 1946 and 1960, for instance, she painted the patio door of her New Mexico home more than 20 times. “I have a single-track mind. I work on an idea for a long time,” she told art historian Katharine Kuh.

“Success doesn’t come with painting one picture. It results from taking a certain definite line of action and staying with it,” she continued.

While O’Keeffe knew when a painting was compositionally strong or successful, she rejected the importance of financial success or frame to making art.

“Whether you succeed or not is irrelevant –there is no such thing,” she wrote to writer Sherwood Anderson. Even when she knew a painting might not be palatable to a wider audience, she saw the value in finishing it -and keeping it for her reference and personal enjoyment.

When she wrote to Stieglitz in 1929 about a new painting she’d begun, she poked fun at its strangeness, saying: “It is difficult to see my new painting… It isn’t really of this country and it doesn’t exist for this place and it isn’t exciting.” Even so, she decided to keep at it: “I think it will come,” she continued. “(Though) it may not be anything for anyone but me.”

Lesson #4: Pay no attention to trends -be yourself 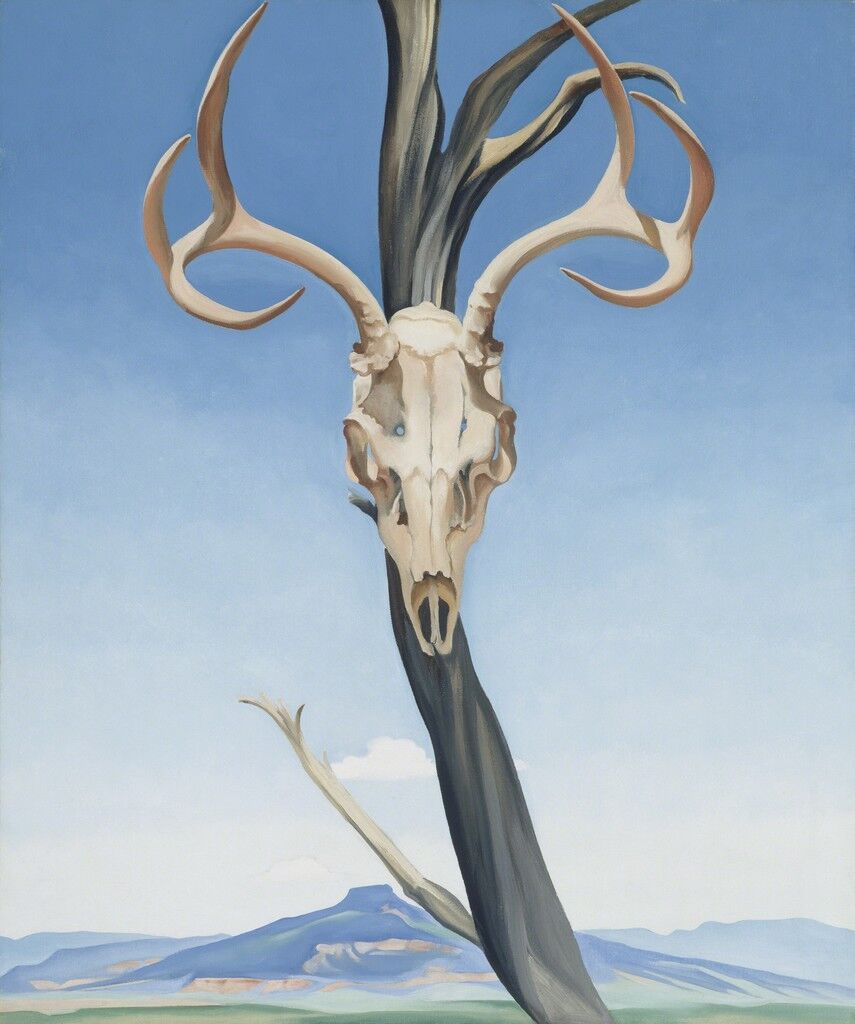 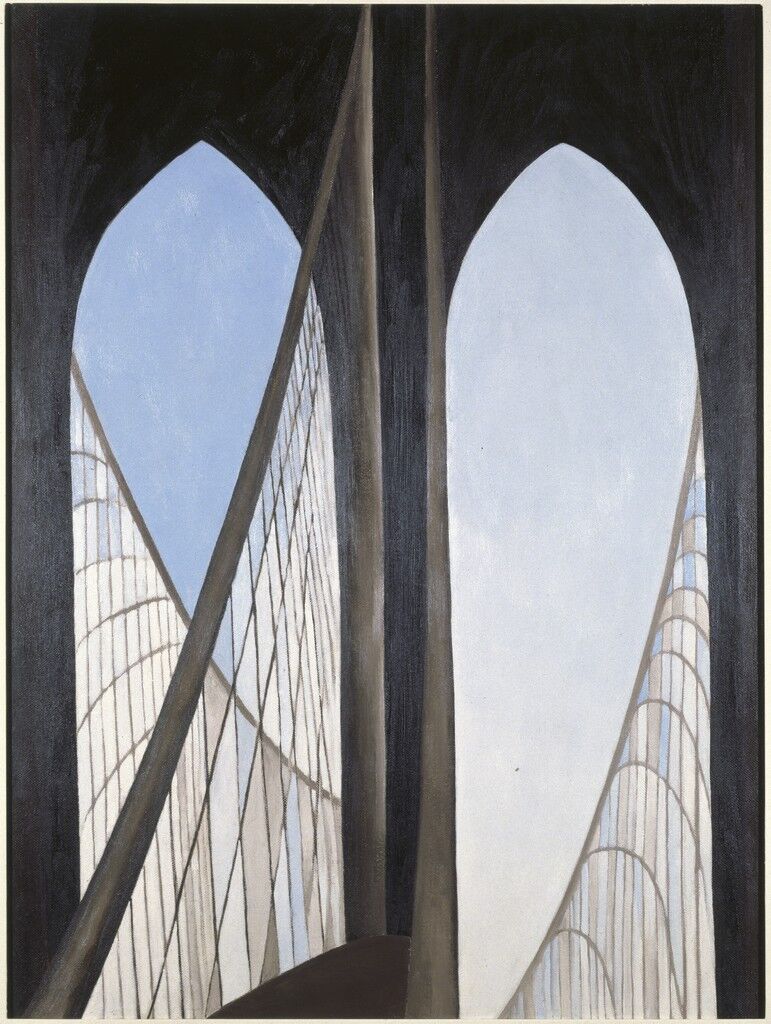 O’Keeffe worked in an era when many competitive artists considered terms like “beautiful” or “pretty” an insult to their work. But O’Keeffe didn’t agree -she wanted to depict the beauty of nature and use sumptuous colours, despite an opposing trend among the circle of artists she moved in. “I’m one of the few artists, maybe the only one today, who is willing to talk about my work as pretty,” she once said. “I don’t mind being pretty.”

In particular, her male counterparts weren’t fans of her vibrant palette. “The men didn’t like my colour. My colour was hopeless. My colour was too bright,” she remembered. But again, she paid no mind to their criticism. “I liked colours,” she stated, resolutely.

She even carved her own path when it came to where she lived and worked. While Stieglitz and the majority of her artist peers remained in New York throughout their careers, O’Keeffe chose to live a mostly solitary life in New Mexico. It was there, and in other solitary environments, that she found the space to be creative. “I’ve been working like mad all day… it seems I never had such a good time,” she wrote to her friend Anita Pollitzer. “I was just trying to say what I wanted to say -and it is so much fun to say what you want to.”

Throughout her life, O’Keeffe desired freedom -from artistic trends, from the pressures of the mainstream art world, from the fetters of a male-dominated society. And it was by bucking expectations that she made a unique and revolutionary body of work. “I believe in having everything and doing everything you want,” she once wrote, “if you really want to -and if you can in any possible way.” Indeed, O’Keeffe lived her dream uncompromisingly and ecstatically. To this day, she continues to inspire others to do the same.