A Hubble Space Telescope picture shows what’s known as an Einstein ring, when one galaxy bends and magnifies the light from a more distant one, as predicted by Einstein’s general theory of relativity. Astronomers have now used Hubble to see light from one star being bent by another in an experiment the famed physicist himself thought would be impossible to perform.

Leave it to the Hubble Space Telescope to prove Albert Einstein wrong. Or at least, unnecessarily pessimistic.

Recently, Hubble spied a dead star about 18 light-years away warping the light of a more distant star that appeared to pass behind it. Einstein predicted this effect would happen based on his general theory of relativity, but he then claimed scientists had “no hope” of actually seeing it.

Of course, he wrote that dour phrase nearly 60 years before humans launched a rather impressive piece of hardware into Earth’s orbit.

Now, Hubble has managed to witness the spectacle, and astronomers were able to read clues carried in the curved starlight and discern the mass of the dead star, called Stein 2051B. The result perfectly matches a prediction of the star’s mass made a century ago.

“I have been thinking of this problem for many years. We were not sure if we could succeed, but it was definitely worth trying,” says Kailash Sahu of the Space Telescope Science Institute, lead author of a report describing the observation published today in the journal Science.

The star-crossed effect, called gravitational microlensing, has been observed before using a much closer star—our own sun—as a lens. Most notably, during the total solar eclipse of 1919, Arthur Eddington measured the positions of stars situated near the edge of the darkened sun. He saw that our home star’s gravity was tweaking that distant starlight, demonstrating that Einstein was onto something with his work on relativity.

Astronomers have used similar techniques to detect exoplanets and clumps of otherwise invisible dark matter, which bend light coming from background objects, and they have used entire clusters of galaxies as lenses to watch faraway stars explode over and over again. 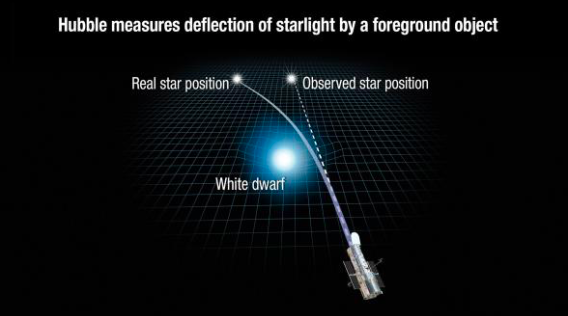 This illustration reveals how the gravity of a white dwarf star warps space and bends the light of a distant star behind it.

But until now, no one had caught one small star in the act of bending light from another. That’s the scenario Einstein laid out in a 1936 paper also published in Science, which he suggested would be near impossible to see.

Turns out, Einstein only published this paper because a buddy suggested he do so: “Some time ago, R. W. Mandl paid me a visit and asked me to publish the results of a little calculation, which I had made at his request,” he wrote. “This note complies with his wish.”

To find the right stellar alignment, Sahu and his team searched through roughly 5,000 possible stars that could act as lenses before identifying Stein 2051B. This cosmic object is a white dwarf, the small, dense corpse of a star that was once similar to the sun.

Then came the harder part. The fortuitous alignment of two stars is one thing, but actually being able to observe it is another. As Sahu describes it, the amount by which the stars move on the sky is almost unbearably minuscule.

He applied for time to use humanity’s sharpest eye in the sky and, once approved, he put the starry pair in Hubble’s crosshairs eight times between October 2013 and October 2015.

Sure enough, Stein 2051B’s gravity curved and displaced the stellar firefly’s light. Based on that deviated light, the team could calculate the white dwarf’s mass. At about 68 percent the mass of the sun and one percent as wide, Stein 2051B almost precisely matches a theory proposed by Subrahmanyan Chandrasekhar in 1930 that describes the quantum mechanical interactions between atoms in the cores of stars.

“His theory predicts that the radius of the white dwarf decreases as the mass increases in a specific way, and our mass measurement precisely confirmed that!” Sahu says.

“Was that surprising? In some ways, yes, since most of the time, the measurement does not exactly confirm the predictions. But it was nice to know that the theory that we have been using so far is correct.”

The Hubble results also suggest that, contrary to earlier guesses, Stein 2051B does not have an iron core, something that would have suggested the star is as old—or older than—the universe. In other words, this little white dwarf is the most normal, boring dead star imaginable, and scientists are thrilled.

Now that Sahu and his colleagues have achieved their sweet cosmic trick, they hope it’ll be helpful for measuring the masses of other stars, perhaps using the European Space Agency’s Gaia satellite, which is busy staring at the nearest billion stars, or NASA’s upcoming James Webb Space Telescope.

“Einstein would be proud,” Terry Oswalt of Embry-Riddle Aeronautical University says in a statement. “One of his key predictions has passed a very rigorous observational test.”