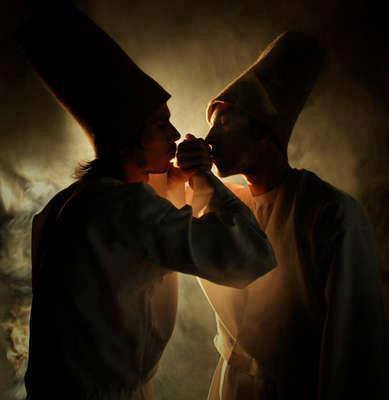 I love my friends neither with my heart nor with my mind.
Just in case…
Heart might stop.
Mind can forget.
I love them with my soul.
Soul never stops or forgets.

The reason we sleep goes far beyond simply replenishing our energy levels every 12 hours – our brains actually change states when we sleep to clear away the toxic byproducts of neural activity left behind during the day.

Weirdly enough, the same process starts to occur in brains that are chronically sleep-deprived too – except it’s kicked into hyperdrive. Researchers have found that persistently poor sleep causes the brain to clear a significant amount of neurons and synaptic connections, and recovering sleep might not be able to reverse the damage.

A team led by neuroscientist Michele Bellesi from the Marche Polytechnic University in Italy has examined the mammalian brain’s response to poor sleeping habits, and found a bizarre similarity between the well-rested and sleepless mice.

Like the cells elsewhere in your body, the neurons in your brain are being constantly refreshed by two different types of glial cell – support cells that are often called the glue of the nervous system.

The microglial cells are responsible for clearing out old and worn out cells via a process called phagocytosis – meaning “to devour” in Greek.

The astrocytes’ job is to prune unnecessary synapses (connections) in the brain to refresh and reshape its wiring.

We’ve known that this process occurs when we sleep to clear away the neurological wear and tear of the day, but now it appears that the same thing happens when we start to lose sleep.

But rather than being a good thing, the brain goes overboard with the clearing, and starts to harm itself instead.

Think of it like the garbage being cleared out while you’re asleep, versus someone coming into your house after several sleepless nights and indiscriminately tossing out your television, fridge, and family dog.

“We show for the first time that portions of synapses are literally eaten by astrocytes because of sleep loss,” Bellesi told Andy Coghlan at New Scientist.

END_OF_DOCUMENT_TOKEN_TO_BE_REPLACED

Philadelphia, PA (Scicasts) — For years, the common narrative in human developmental neuroimaging has been that grey matter in the brain – the tissue found in regions of the brain responsible for muscle control, sensory perception such as seeing and hearing, memory, emotions, speech, decision making, and self-control — declines in adolescence, a finding derived mainly from studies of grey matter volume and cortical thickness (the thickness of the outer layers of brain that contain grey matter).

A new study published by Penn Medicine researchers this month and featured on the cover of the Journal of Neuroscience may help resolve this puzzle, revealing that while volume indeed decreases from childhood to young adulthood, grey matter density actually increases. Their findings also show that while females have lower brain volume, proportionate to their smaller size, they have higher grey matter density than males, which could explain why their cognitive performance is comparable despite having lower brain volume. Thus, while adolescents lose brain volume, and females have lower brain volume than males, this is compensated for by increased density of grey matter.

END_OF_DOCUMENT_TOKEN_TO_BE_REPLACED

By Stephen Matthews For Mailonline

Going to classes in the ancient Chinese martial art for 12 weeks significantly reduced symptoms of the blues.

It can work independently of treatment, suggesting it can scupper the need for an antidepressant prescription, the small study shows.

The meditative practice, which has been used for more than 1,000 years, combines deep breathing and slow and gentle movements.

Going to classes in the ancient Chinese martial art of Tai Chi for 12 weeks significantly reduced symptoms of the blues in depressed adults, a study found

Researchers at the Massachusetts General Hospital enrolled 50 Chinese-American participants for the study.

All of the volunteers had mild to moderate depression and were not receiving any other forms of treatment at the time.

They were placed at random in three groups. The first took part in Tai Chi, a second received educational therapy and the third was a control group.

END_OF_DOCUMENT_TOKEN_TO_BE_REPLACED

Inflammatory responses play a central role in the development and persistence of many diseases and can lead to debilitating chronic pain. In many cases, inflammation is your body’s response to stress. Therefore, reducing “fight-or-flight” responses in the nervous system and lowering biological markers for stress can also reduce inflammation.

The vagus nerve is known as the “wandering nerve” because it has multiple branches that diverge from two thick stems rooted in the cerebellum and brainstem that wander to the lowest viscera of your abdomen touching your heart and most major organs along the way. Vagus means “wandering” in Latin. The words vagabond, vague, and vagrant are all derived from the same Latin root.

In 1921, a German physiologist named Otto Loewi discovered that stimulating the vagus nerve caused a reduction in heart rate by triggering the release of a substance he coined Vagusstoff (German for “Vagus Substance”). The “vagus substance” was later identified as acetylcholine and became the first neurotransmitter ever identified by scientists.

Vagusstoff (acetylcholine) is like a tranquilizer that you can self-administer simply by taking a few deep breaths with long exhales. Consciously tapping into the power of your vagus nerve can create a state of inner-calm while taming your inflammation reflex.

END_OF_DOCUMENT_TOKEN_TO_BE_REPLACED

However widespread and familiar they may be, many presentations of religion are abbreviated and distorted versions of something of which the original is not known to current practitioners. The outlines can be discerned, more often than not, and examples of some parts of these are given later.