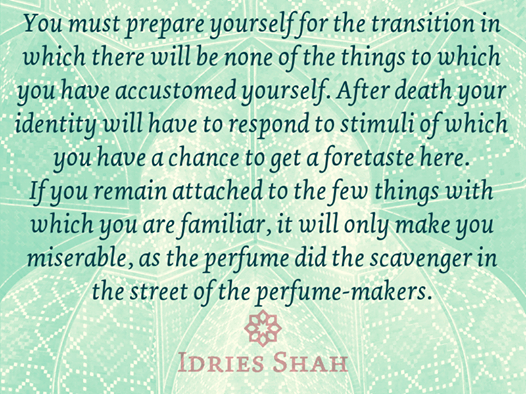 A SCAVENGER, walking down the street of the perfume-sellers, fell down as if dead. People tried to revive him with sweet odours, but he only became worse.

Finally a former scavenger came along, and recognized the situation. He held something filthy under the man’s nose and he immediately revived, calling out: ‘This is indeed perfume!’

You must prepare yourself for the transition in which there will be none of the things to which you have accustomed yourself. After death your identity will have to respond to stimuli of which you have a chance to get a foretaste here.

If you remain attached to the few things with which you are familiar, it will only make you miserable, as the perfume did the scavenger in the street of the perfume-makers.

This parable explains itself. Ghazali uses it in the eleventh-century Alchemy of Happiness to underline the Sufi teaching that only some of the things of familiar existence have affinities with the ‘other dimension’.

Available in printed and eBook editions. Read the book, for free, here:
http://idriesshahfoundation.org/…/tales-of-the-dervishes-t…/

In the Street of the Perfume-Sellers