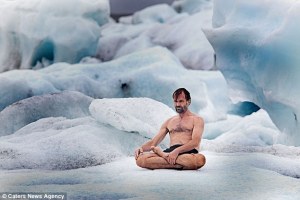 A man who swims naked in Arctic seas, a girl born with her heart on the outside of her chest, a boy with unbreakable bones.

Wim Hof (pictured), from Sittard in the Netherlands, claims his ability to withstand freezing conditions without developing so much as a sniffle is down to ‘meditation and breathing techniques’

Incredible but true – and just a few of the one-in-a-million cases helping to educate scientists and aid medical research to benefit millions of people, a groundbreaking BBC2 series has revealed.

Incredible Medicine, which started last Wednesday, follows Trust Me I’m A Doctor’s Gabriel Weston as she meets dozens of ‘human miracles’ who have survived crippling diagnoses, live with severe deformities or whose bodies remain a mystery to doctors.

One of them is extreme weather athlete and ‘professional daredevil’ Wim Hof, from Sittard in the Netherlands, who claims his ability to withstand freezing conditions without developing so much as a sniffle is down to ‘meditation and breathing techniques’.

Scientists hope that by studying his methods and teaching them to others they may be able to discover new treatments for diseases such as asthma, rheumatoid arthritis and eczema.

When the human body is exposed to extreme cold, our core temperature drops, causing the body to enter a state of hypothermia, and eventually we freeze to death.

But 57-year-old Hof has been able to spend nearly two hours in an ice bath and emerge unharmed.

The Iceman, as he is known, has also run a full marathon above the Arctic Circle wearing just shorts.

He puts his capabilities down to his self-developed meditation and breathing technique – known as the Wim Hof Method – enabling him to control his body’s autonomous hormonal responses.

This was tested by researchers at Radboud University Medical Centre in the Netherlands as part of research into the treatment of autoimmune diseases.

Hof was injected with endotoxin, a substance that tricks the body into thinking it is under bacterial attack.

He should have developed a fever and flu-like symptoms but did not, so researchers concluded that there may be truth to his claims about his ability to suppress his automatic immune response.

Radboud is now using the Wim Hof Method on volunteers with various autoimmune diseases. Results of the study are due to be published this year. Researcher Dr Matthijs Kox said: ‘The real test will be when we test these techniques on real patients with autoimmune disease. If effective, this will lead to a new treatment.’

There are some 80 different types of autoimmune diseases, including type 1 diabetes, rheumatoid arthritis, coeliac disease, psoriasis and asthma, affecting billions of people globally.

Also featured in the BBC series is 50-year-old Steve Ludwin, a Californian musician living in London who has been injecting himself with snake venom for nearly 30 years.

In addition to still being alive, he looks a decade younger than his age, and claims to have had no colds or flu in 13 years.

His habit brought him to the attention of pharmaceutical engineers at the University of Copenhagen, who are now trying to develop safer anti-venom drugs by using antibodies in Steve’s ‘immune’ blood.

Another amazing subject is Joy Milne, 66, whose sensory super-power may have the potential to change the course of medicine.

Joy, from Perth in Scotland, can smell if a person has Parkinson’s disease, and scientists are trying to determine the exact chemical she is able to detect. If they’re successful, it could pave the way for developing an early diagnostic tool for the condition.

Then there is Adam King, two, from County Cork in Ireland who was diagnosed before he was born with osteogenesis imperfecta – brittle bone disease – a genetic defect. Adam’s parents contacted Dr Cecilia Gotherstrom at Sweden’s Karolinska Institute who is investigating a treatment involving injecting foetal stem cells into an unborn baby.

Adam has not broken a single bone since birth and Dr Gotherstrom hopes her technique will open up new possibilities in treating genetic illness in utero.

Dr Weston says: ‘As a doctor you are rarely exposed to cases like these. Characters like Wim Hof and Steve Ludwin, who may seem as if they live on the edges of what we consider normal, are doing something that is going to have a remarkable benefit for society.’

Incredible Medicine: Dr Weston’s Casebook is on BBC2 on Wednesdays at 9pm.

The man who has unbreakable bones

Timothy Dreyer could be a character in a superhero movie – but may well be a real-life saviour thanks to his special ‘power’.

The 26-year-old South African has a condition called sclerosteosis, which means his bones are so dense he could walk away from accidents that leave others with broken limbs.

Now the gene which gives Tim his thick bones is being studied by UK biologists trying to develop a drug for osteoporosis – brittle bones – which affects three million people in the UK.

A team led by structural biologist Dr Alistair Henry at Slough-based drugs company UCB is looking at the genes controlling bone growth in people with sclerosteosis, to develop a drug which is now being tested on humans.

Dr Henry said: ‘The data we’ve collected so far is very promising. We’re in the process of late-stage clinical development for a new medicine.’