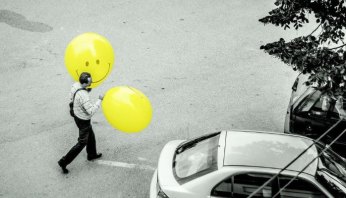 A new study by King’s College London, UCL and Birkbeck, University of London, casts doubt over claims that people are inherently over-optimistic or ‘optimistically biased’ about the future.

For many decades scientists have believed that people have an ‘irrational optimism bias’ — a tendency to underestimate their chances of negative experiences, while overestimating their chances of positive events.

Optimism bias is thought to have contributed to past financial crises and the failure of individuals to look after themselves (e.g. eating healthily to avoid obesity) or their environment (e.g. fighting climate change). The UK government even considers optimism bias when planning large infrastructure projects and deciding which projects should be funded (HM Treasury Green Book).

Research has most recently claimed that people fail to learn from bad news when told the actual chance of experiencing a negative life event (such as cancer). Such a failure to learn from bad news would result in an optimistic outlook (The Optimism Bias; Sharot, 2012). However, this new study, published inCognitive Psychology, demonstrates major flaws in this research supporting the existence of this optimism bias. According to the authors, prior studies have generated data patterns that look like people are being over-optimistic, when no such bias exists.

The researchers subsequently created computerised simulations designed to behave in a completely rational way when faced with the same psychological tests used in previous research (e.g. learning from good vs bad news about future events). By definition, these simulations are not optimistic and thus will not show bias. However, these computer simulations produced the same pattern of data that is usually interpreted as showing optimism bias, due to the fact that belief scores changed more in response to good than bad news.

The study therefore shows how apparent optimism for negative events (and pessimism for positive events) can arise as a result of purely statistical processes. According to the authors, this supposed optimism bias is an artefact of the tests used to assess it, in conjunction with the rarity of negative events.

In addition to their simulations and analytical work, the researchers conducted five studies in which they corrected for these methodological problems as far as possible. In these improved studies they observed no evidence whatsoever for people learning more from good than bad news (i.e. no evidence for optimism bias).

Punit Shah from the MRC Social, Genetic and Developmental Psychiatry (SGDP) Centre at King’s College London, said: ‘There is ample evidence for optimism bias in various real-world situations — England football fans for example — but these instances simply show that certain people might be optimistic in certain situations; not that they are generally optimistic.’

Dr Adam Harris from UCL said: ‘Previous studies, which have used flawed methodologies to claim that people are optimistic across all situations and that this bias is ‘normal’, are now in serious doubt. We need to look for new ways of studying optimism bias to establish whether it is a universal feature of human cognition or not.

‘This assumption that people are optimistically biased is being used to guide large infrastructure projects, with the aim of managing expectations around how much projects will cost and how long they will take to complete. Our research supports a reexamination of optimism bias before allowing it to guide clinical research and policy.’