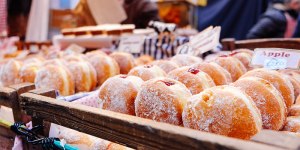 You don’t have to be eating decadent cakes, processed candies, sugary sodas, and pints of ice cream to be eating large amounts of sugar, commonly in the form of corn syrup. You might be surprised to notice corn syrup in the ingredients of food such as breads, frozen pizzas, macaroni & cheese, cereal bars, cocktail peanuts, tonic water, salad dressing, apple sauce, and ketchup. In our fast-paced lives it is very difficult to avoid the myriad of foods that contain fructose. Even when we think we are feeding our families “healthy” food, it can still contain ingredients that have been found to be harmful. The good news is, studies have shown there are other nutrients that may help with the effects of fructose.

The study by researchers from the University of California, Los Angeles (UCLA), showed that DHA can reverse the harmful alterations to hundreds of genes that are produced by excessive consumption of fructose, especially in the form of high-fructose corn syrup.

The new research demonstrated that consuming a lot of fructose in the diet can actually change the expression of hundreds of genes, including genes that may lead to a greater predisposition toward metabolic diseases such as diabetes, and brain disorders such as attention-deficit hyperactivity disorder (ADHD) and Alzheimer’s disease.

Excitingly, it was additionally demonstrated that DHA largely reversed the fructose-induced changes in these brain. DHA is an omega-3 fatty acid that is essential to the brain and can be found in fatty fish, such as salmon, as well as in walnuts, flaxseed, and omega-3 fatty acid supplements. The brain and the body are not able to manufacture DHA; it has to come through our diet.

The scientists tested the effects of fructose and DHA in a group of rats that were trained to escape from a maze, and then were randomly divided into three groups. For the next 6 weeks, one group of rats drank water with an amount of fructose that would be approximately equivalent to a person consuming of a liter of soda per day. Rats in the second group were given fructose water and a diet rich in DHA, while the third group drank water without fructose and ate no DHA.

Furthermore, the research team sequenced tens of thousands of genes in the rats’ brains and identified more than 900 genes, the vast majority of which are comparable to genes in humans, which were altered by the fructose. Some of the conditions that can be caused by alterations to those genes are depression, Parkinson’s disease, and bipolar disorder.

Historically, the focus regarding the effects of high-fructose corn syrup has been about weight gain and obesity, but this study shows that a high-fructose diet not only harms the body, but harms the brain as well. It also highlights yet another phenomenal health benefit of ensuring that you are getting enough omega-3 fatty acids in your diet.