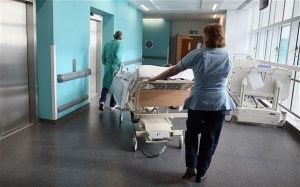 A hospital has come under fire after telling staff in an internal newsletter that “dying well can be fun”.

The memo, sent around Epsom and St Helier Hospitals in Surrey, went on to boast that a “Death by Chocolate” themed event laid on in the palliative care department had been “very well received”.

The poorly phrased note, which was leaked by an employee, was part of a staff briefing about Dying Matters Awareness Week, which aimed to promote the concept of living well and planning for dignified death.

The newsletter was circulated by Suzette Fernandes, the general manager of clinical services.

Part of it read: “Dying matters celebrates life – and reminds us that we only die once!

“Examples include registering as an organ donor, making a will – and some people like to record their funeral wishes also.

“Living well and dying well can be fun as well as serious.

“As you can imagine, Palliative Care’s theme “Death by Chocolate” – was very well received.”

A spokesman for the trust has apologised for the letter, which was circulated to staff on May 20.

He said: “We would like to apologise for any offence our promotion of national Dying Matters Awareness Week may have caused.

“The aim is to encourage people to talk more openly about dying, death and bereavement, and to make plans for the end of life.

“Each one of us is different, and it is important to recognise that some people, acknowledging that they are dying, as well as recognising the sadness and seriousness of what is happening, want to include laughter and happy times and to make good memories for family or friends.”